I can't believe Christmas is just around the corner, just under two weeks away!  Eeek!  Sorry for posting late, as usual.  I have had every good intention of getting my blog up to date because I have been busy creating over the last month but I've also been seemingly too busy to sit down and jot a post.  It's harder than I thought to keep a blog going, even with reminders.

Anyhow enough procrastinating.  As I said, it's just under two weeks until Christmas, my favourite time of the year, and I'm only halfway through a quilt I'm making for my father-in-law.  I had the great idea to make him a throw quilt with images of his family all over it, since the man spends most of his time in his 'bear den' and nothing means more to him than his family.  I know this is a gift that will bring about the waterworks - his son loves to make him cry..everyone says he's mean to do that but really, I know the real reason why he likes to do it - because then it means the gift has really touched his father and means something to him.  My father-in-law really is just a big old teddy bear and nothing gets him more than sentimental stuff.

I'm still not done the quilt but I thought I would share some images of my project so far and I'll post the finished product once it's completed (hopefully before Christmas Eve!). 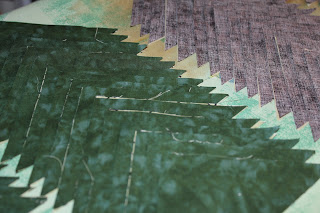 Next is a photo of the start of the quilt.  I'm about halfway done the front of the quilt and then I'll need to figure out how to sew the back part on so it doesn't bunch. 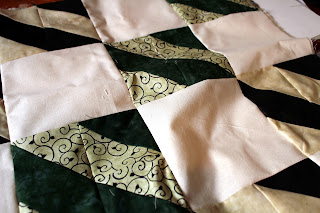 I can do a basic quilt like this but trust me, I am not nearly advanced enough to put the cool swirly designs on it, etc.  I think he'll like the finished product though.  Stay tuned for more pics, and Happy Holidays Everyone!

Cheers
Posted by Unknown at 1:01 PM